The Mystery of My Life as a Fly Fisher

Since I was young, I felt a strange fascination with the mystery of my life. There was so much that I simply did not understand about myself or, of life in general.  I will soon be 60, and this preoccupation continues as I try to unravel the meaning of my life.

Often Christians told me that I was too inward. Teachers told me I was too serious. Friends told me to lighten up.  While I considered their words, and entertained the thought that I might be out of balance, for the most part I continued to think introspectively about the existential condition of my life.

Over the years, the existential poets and philosophers have helped me.

Soren Kierkgaard, the founding father of existentialism said it was a mistake to look outward. If we do, we tend toward mere “talkativeness.”  He continued to ask the tough questions: Where am I?  Where do I belong?

Rilke describes looking up at the evening sky and says the image leaves him with the task of trying to unravel the mystery of his life.

Dostoevsky said that he had to face the mystery of his life, if he wanted to be a man.

Socrates said the un-examined life is not worth living.

Camus said life was absurd.  And yet, like Sisyphus, we are to continue to push the boulder up the mountain again and again even knowing it will simply roll back down.

Another year and decade begins full of mystery. What will the coming days bring? Will the fishing be good?

What is the meaning of the big fish that will get away or any of the fish that we might hold in our hands?

Will we preserve our delicate fish populations or cause injury?
Posted by Anthony Surage at 8:50 AM No comments:

Dictionary .com chose “Existential” as the word of the year.

While it may be difficult to clearly define the word existential, it is safe to say that this word, in part, deals with our existence and the meaning of our lives.

I like this word.  It is philosophical and brings me inward to ponder.  If I am being existential I am considering the big questions of life. Who am I? Where do I belong? What is the meaning of my life? If I am fly fishing in a river, pondering where I belong among the fish and currents, I am being existential.

Most importantly (at least for me), if we look back to the founding father of existentialism, we find a melancholy man, Soren Kierkegaard who claimed to be a Christian.  As he pondered the meaning for his own life he was deeply convicted that God was an important part of the equation.   Kierkegaard believed that the individual is responsible for his choices. And that included choosing God.

What is strange to me, in our present age, is that in many of our evangelical churches, if one brings up anything that has a whiff of existentialism in it, he will likely draw some strange looks. Our evangelical churches should be the places we can go, to ask/share the difficult, painful, inward questions; bring them to the surface with our existential pain and angst, but often they are not.

Symbolically speaking, I feel I am sustained by living in the existential tension of life. I live in the tension of unanswered questions and not quite knowing where I belong.

At times I float, at other times I feel as though I am sinking.

Unanswered questions: Who am I? What is the meaning of my life?  “God, is that you who sustains me”?

The tension is sustained by not being certain.
Posted by Anthony Surage at 6:51 AM No comments:

After writing Bringing Back Eden: Meditations of a Fly Fisher, I now reflect upon what I wrote. I ask, What was I thinking?  What was I trying to say? What story was trying to emerge?

What emerged was a book about fly fishing that ended up being very existential.  I was painfully repetitive asking those same old questions: Who am I? Where do I belong?  Where is God? Does God intervene in my life? Where is home, the Eden of my youth?

I repeatedly describe casting and casting as a reaching out, hoping for some kind of a response from the fish (as though they are personally responsible for my well being). I describe a deep inner loneliness that was both a painful and beautiful experience, reminding me of my deepest longings.

In the beginning of the book I describe myself as a disillusioned Christian. Yet how can I call myself Christian when I write and talk more like an existentialist and I am more disillusioned than believing? I am more critical than affirming. I live in angst more than in peace. Yet, I can’t throw it all away.

I describe feeling mesmerized by my own existence. I question what was I doing walking around that pond in northern New Jersey all by myself teaching myself to fly fish? What was I truly seeking? What did I want?  Did I exist merely on  the banks of the pond  or did Something else sustain me?

I live in and upon the tension of the questions and the mystery of my life. I continue to question. I continue to cast into mysteries and I invite others to do the same.

To me, this is what it means to be deeply and truly human.
Posted by Anthony Surage at 6:02 AM No comments:

I Dropped Out Of Social Media: Do I Still Exist?

I dropped out of social media for a while. Do I still exist?

It is a strange illusion. Did I really think I could exist by posting my thoughts and pictures on line?

Sometimes things happen in life that challenge my sense of self and those old questions nag me; Who am I? Do I truly exist?  Do I truly belong?

Since I was a child fly fishing has helped me with these existential concerns. Even now when some of  the people I loved are no longer here, and I feel lost,  returning to the river can ease my pain helping me regain who I am.

As the poet Rilke says, "And if the earthly no longer knows your name, whisper to the silent earth: I'm flowing. To the flashing water say: I am."

I stand in the river casting in the flowing, flashing river and I remember him.

I whisper, I still am. I still exist.

Posted by Anthony Surage at 8:27 AM No comments: 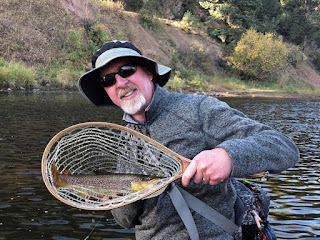 Fish are rising in the Deckers area up and down the river. Fish are rising to some late tricos, PMD's BWO's, and midges. Drifts must be perfect. Hook sets must be timed perfectly and gently.

Posted by Anthony Surage at 3:41 PM No comments:

What River Is This? 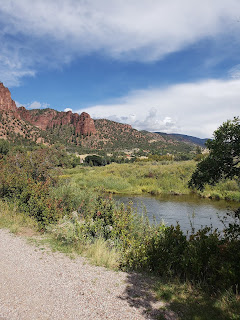 Posted by Anthony Surage at 4:00 PM No comments: 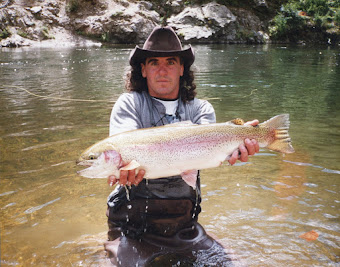 Click on my picture to visit anglerscovey.com and request me for a guided trip